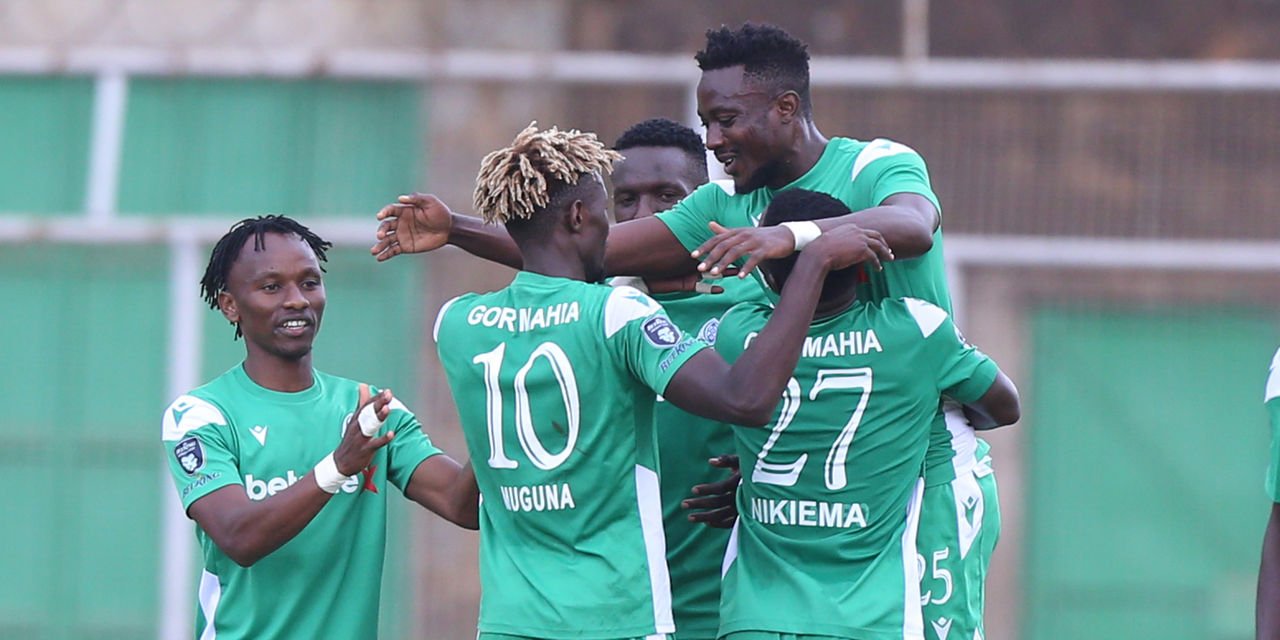 Second half substitute Jules Ulimwengu scored the lone goal through a close range shot in the 74th minute after receiving a neat pass in the danger zone from Kenneth Muguna.

Gor's win took their points tally to 37 after 19 games, same as Leopards, who have an inferior goal difference, with 14 matches left to play.

At Utalii grounds, Tusker got back to winning ways edging out Kariobangi Sharks 1-0 courtesy of Chrispinus Onyango 63rd minute strike.The breweres are now on 41 points, one shy of league leaders KCB both teams having played 20 matches. Sharks, who have not won five straight matches, are fifth on 31 points.

Newbies Bidco United forced a resurgent Posta Rangers to a barren draw in another contest at Ruaraka grounds.

KCB leads the log on 42 points from 20 matches after securing a vital 1-0 win against bottom placed Mathare United on Saturday. Batoto ba Mungu on the other hand dropped to 12th on 23 points.

After winning the first leg by a solitary goal in Wundanyi, K'Ogalo were on the rampage from the onset, pitching tent in Sofapaka's half in the early stages of the contest.

Gor got a free kick at the edge of the box after Sammy Imbuye's dangerous foul on Kenneth Muguna, who had to limp off to be attended to. Clifftone Miheso took the ensuing free kick which went wide for a goal kick.
Sila Kiplagat

Four minutes later, former K'Ogalo midfielder Lawrence Juma was booked for a rash foul on youngster Alpha Onyango as the duo tussled for an aerial ball in the midfield.

Juma would then dribble past left back Geoffrey Ochieng at the half hour to pick out burly forward Piston Mutamba, but the latter fired wide to the disappointment of Sofapaka technical bench.

With five minutes to the break, Harambee Stars under-23 call up and teenage midfielder Ambrose Sifuna then rounded Andrew 'Roma' Juma on the left, found Titus Achesa, but instead of shooting in an empty net, opted to pass the ball to a wasteful Mutamba whose low powerful shot went wide.

Gor Mahia goalie Gad Matthews was forced to come out of his line to block Achesa's shot in the final moment of the first half.

In the 56th minute, Wendo unleashed a powerful shot at the edge of the box which was parried by Omondi back to the field, but Kibwaga cleared it out.

Gor's Portuguese tactician made the first change of match in the 60th minute with 2- year old Burundian Jules Ulimwengu coming on for Juma. Alpha Onyango was then booked for a challange on Juma in the midfield a minute later.

Sofapaka tactician Ken Odhiambo then made a double change, Alex Imbusia and Amissi Bizimana coming on for Nixon Omondi and Mutamba respectively in the 70th minute.

Four minutes later, Muguna fed the ball to Ulimwengu on the right and the Burundian wasted no time clinically shooting past a helpless Omondi.

Sofapaka then threw every one upfront, but Gor thwarted the moves with Vaz Pinto bringing on Sydney Ochieng and Charles Momanyi late on to help control the midfield and cement the defence.

Hell broke loose in the final minute after Sofapaka were denied a clear of penalty from Lawrence Juma's free kick after Charles Momanyi handled the ball.

Omalla cannot even get a position on the bench .. awuoro.
Top
Post Reply
3 posts • Page 1 of 1