Kenneth Muguna off to Azam

Kenneth Muguna off to Azam 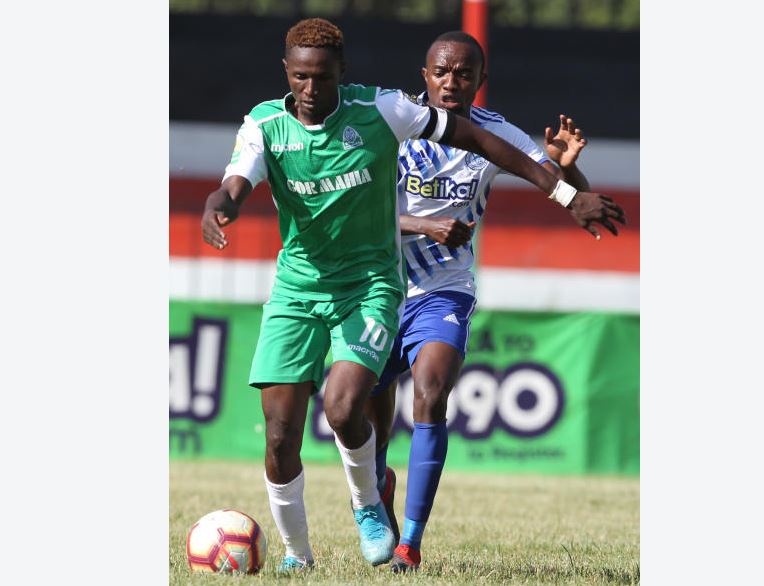 Playmaker Kenneth Muguna, who has been in fine form this season, has left for Azam as was widely expected


Azam Communication Director Zaka Zakazi in an exclusive interview with Nation Sport from Dar es Salam confirmed that the iconic midfielder was in Tanzania early this month and penned down a two year contract with the team.

Zakazi also revealed that the club paid Muguna 15000 dollars (Sh1.6 million), which is part of the signing fee to clear the Caf fine the Kenyan had been slapped with after he was found guilty of unsporting behaviour.

“Muguna flew here and we are happy that at last we have a player whom we have been chasing for the past three years despite strong resistance from Gor,” said Zakazi.

“What is only remaining before he joins us is the release letter from Gor and the proof of payment to Caf. We are aware the deadline to make the payment is Tuesday and have already sorted him out. He will receive the rest of the money once he joins us,” added Zakazi, who declined to quote the exact amount of fee agreed between the former K’Ogalo captain and the money bags.

Efforts to get a comment from Muguna proved a cropper as his phone went unanswered. Gor Mahia officials were also unavailable for comment.

In May, the continental football body fined Muguna and former K’Ogalo custodian Boniface Oluoch Sh1.6 million each for their role in chaos that rocked a Caf Confederation Cup qualifying match away to Napsa Stars of Zambia in February.

The two were also slapped with a four-month ban. The duo took their anger out on the match referee after Gor conceded a late penalty, a result which saw them crash out of the competition.


“We know of the four match ban and it is an issue which was addressed before the player committed with us,” added Zakazi.

The 25-year-old playmaker was stripped off the K'Ogalo captaincy in March and the armband handed to defender Harun Shakava. However, he has maintained his form on the pitch and helped the club win the FKF Betway Cup.

Re: Kenneth Muguna off to Azam

All the best to you captain
Top

Re: Kenneth Muguna off to Azam

Muguna posts thanks you letter to Gor Mahia fans


Gor Mahia’s talisman Kenneth Muguna has paid tribute to the club’s supporters as he nears his exit from the team.


Muguna, 25, is expected to join Tanzania’s Azam FC when his contract with Gor expires in October.

Azam’s Communication Director Zaka Zakazi had on July 12 confirmed the development, saying the midfielder had signed a two-year contract with the team.

“Muguna flew here (Tanzania) and we are happy that at last we have a player whom we have been chasing his signature for the past three years despite strong resistance from Gor,” Zakazi told Nation Sport then.

In a Facebook post seen by Nation Sport Tuesday, Muguna thanked Gor’s supporters for the support that they have offered him during his time at the club.

He said that he is satisfied with what he has achieved at the club and that it was a great opportunity to “play under great coaches and management”.

“When I arrived at this great club, I was just a young man with dreams of representing the biggest club in the country. I didn't expect things to go as well as they did, but you (Gor Mahia’s fans) made it a lot easier for me and not to forget the high level of players with so much quality, who were always there to support and make me feel comfortable,” said Muguna.

He accompanied the post with the a photo of the team celebrating after they won the 2021 Football Kenya Federation Betway Cup at Nyayo National Stadium.

“Looking at what I have achieved at the club is so satisfying. I was lucky enough to play under great coaches and great management as well. Thanks to the chairman and the whole management for their effort in renewing my contract, though I felt like I needed a new challenge. Thanks for the years we spent together and I hope that we enjoy the remaining matches,” he added.


After honing his skills at the Kisumu-based Palos FC, Muguna joined Western Stima in 2007 until the end of 2015 when he moved to Gor.

In 2018, he moved to Albania’s KF Tirana, but his stay at the European side was short-lived due to injuries and off-the-field issues.

He then rejoined Gor where he developed to become the club’s backbone in the midfield. Apart from the 2021 FKF Betway Cup title, Muguna boasts of having helped Gor win the last four league titles.