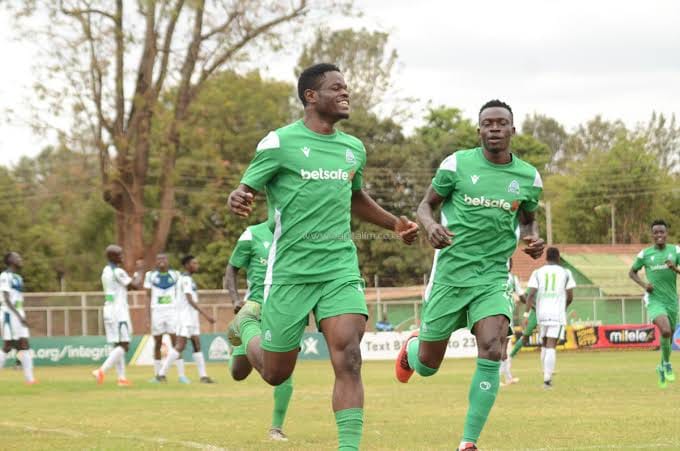 At Ruaraka Grounds in Nairobi, Nairobi City Stars failed to leapfrog Tukser into second on the log after going down 2-0 to Sofapaka while Kariobangi Sharks edged out Posta Rangers 3-2 at MISC Kasarani Annex.

Before the match both teams observed a minute of silence in honour of Kenya's departed third President Mwai Kibaki.

The tie was even between the two sides before K’Ogalo scored with bankers reigning supreme in ball possession but lacked the tactical prowess to crack K’Ogalo’s defence.

The win revived K’Ogalo’s faint hopes of clinching the league they lost to Tusker last season as they are on 45 points same as third-placed Nairobi City Stars with only seven matches to the end of the season.

KCB coach Zedekiah Otieno said his charges dominated the game and the late goal disorganised his charges who have now won only once in the last 10 matches. He however, claimed Gor Mahia goal was netted from an offside position.

“There was an element of offside but that is football. The results and the position we are in is not good because we are dominating games but end up losing. Now it is only about individual performance because we have done everything and we have to bounce back mentally,” said Otieno.

“Hopes of getting the title are still there but they are reducing game by game,” added Otieno.

Gor Mahia coach Andreas Spier was elated with the win and rallied his charges to continue fighting for the league title by reducing the gap between them and leaders Kakamega Homeboyz.

“It was a fighting match between two teams and my defensive condition was very good today. The win is a good reaction from the team and we are happy with the three points,” said Spier.

“I urge our fans to come back now that we are one match away from the derby and we need to win our next game to build on our mentality. We are targeting second place but if we play well and the chance of winning the title comes then we shall take it,” he added.

Rachier says incompetent officials are to blame for the problems in Kenya football. Has he looked in the mirror?


Strict professionalism in football administration can avert the upheavals that have rocked the country in recent months, Gor Mahia chairman Ambrose Rachier has said.

In an exclusive interview on Monday, the long-serving K'Ogalo honcho attributed the series of mishaps bedeviling the country's football scene to bad policies that have been formulated and implemented in the past.


Rachier cited a previous decision by the expelled Football Kenya Federation administration to terminate the contract of Kenya Premier League Limited as an epitome of misguided leadership.


“Right from the outset, I was opposed to the controversial decision by the disbanded office administration to terminate Kenyan Premier League company's contract to run the country's top-flight football,” said Rachier.

“Our problems have emanated from bad leadership and that explains our current situation,” Rachier said.

“All we need is to have people who are willing to preside over football activities in a professional manner. Unless we do so, our problems will recur,” he added.

Rachier said he didn't think plans by the Caretaker Committee to lay the ground for the election of new officials would bear much significance, given its status in the eyes of the world football governing body, Fifa.

“I really wouldn't want to delve into the debate of the Caretaker Committee's capacity to preside over the activities of football in the country,” Rachier said.

“Even if the Caretaker Committee called elections as it is planning to do, the officials would not be recognized by Fifa because the committee lacks the legal mandate to call for such an exercise by Fifa laws,” Rachier said.

Rachier said proposals by FKF delegates to elect an interim office were quite in order as long as the intention was to get the country out of the current crisis.


In a Special General Meeting held at Sportsview Hotel in Nairobi on Saturday, 44 delegates drawn from the FKF branches across the country, unanimously agreed to elect an interim office.

They said that NEC members are incapable of executing their mandate after Sports Cabinet Secretary, Amina Mohamed, disbanded the embattled federation on November 12.

“I was not invited to participate in the event and I'm reading all about it in today's newspaper. However, I support any idea meant to steer the country forward,” Rachier said.

Asked if such a move was bound to sink the country into further upheavals by putting the delegates at loggerheads with the Football Kenya Federation Caretaker Committee, Rachier said he didn't think so.

“The world football governing body, Fifa, does not recognise the Caretaker Committee and all its activities so, in essence, its existence does not serve much to help our football.