Record Football Kenya Federation Premier League champions Gor Mahia on Monday dissociated itself from activities of the club chairman Ambrose Rachier who confessed of being a Freemason.


In an interview with NTV on Sunday, Mr Rachier said he was introduced to Freemasonry in 1994 by his close friends, adding that the secret society is not based on any particular religion.

The Nairobi-based lawyer said the Masonry includes many people in the country drawn from varied professions.

However, the admission has left opinion dived with many Kenyans with more questions.

The Club Executive Committee (EC) said the club should not be drawn into Rachier's individual life of being a freemason since they don't practice it.

"As Gor Mahia Secretary General and on behalf of the Executive Committee, I watched with interest our Chairman's interview with Freemasons. The EC members, players, employees and Gor Mahia want to assure our fans that we are not part of Freemason society and that our Chairman's affiliation to that society is personal journey as attested in the media," said a statement to the press by Club Secretary General Sam Ochola.

"The EC kindly request all fans of the club to stay calm as we mitigate the way forward," added Ochola.

Apart from Ochola and Rachier, the Gor Mahia Executive Committee comprises of Vice Chairman Francis Wasuna, a renowned lawyer and Dolphina Odhiambo, who is the club treasurer.

Sources at the club revealed to Nation Sport that the leadership wants Rachier to resign as chairman because his admission has tainted the club's image and they are not ready to put up with the negative publicity which can affect sponsorship.

Rachier, a renowned city lawyer, has been at the helm of Gor Mahia since 2009 when he replaced Erastus Okul.

Re: Gor Mahia: We're not freemasons

Former official Judith Nyangi to lead a demo against Rachier.
Here is her letter 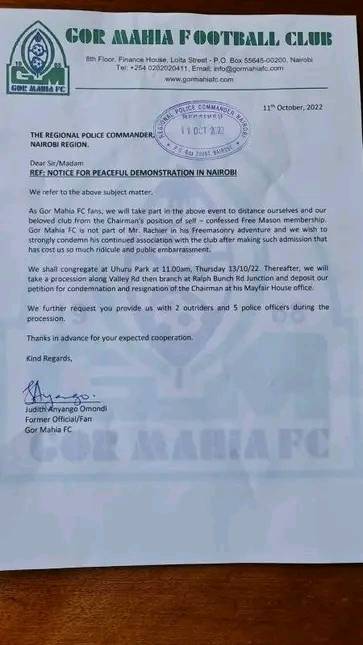 
Gor Mahia fans will Thursday hold a peaceful demonstration to club chairman Ambrose Rachier's Nairobi office to force him to resign after he came out as a Freemason.


Former Organising Secretary Judith Anyango in a letter written to Nairobi Regional Commander has requested for security during the exercise which kicks off at 11am.

"We shall congregate at Uhuru Park at 11 am. Thereafter we shall take a procession along Valley Road then branch at Ralp Branch Road Junction and deposit our petition for condemnation and resignation of our chairman at his Mayfair House office," said part of the letter.


The fans have requested for two outriders and two police officers during the exercise.

Anyango also said that Rachier's involvement into the secret sect, which also has Christians as its members, has tainted the club's image.

"Gor Mahia is not part of Rachier in his Freemasonry adventure and we want to condemn his continued association with the club after making such admissions which have cause us ridicule and public embarrassment," added the letter.

Rachier over the weekend dismissed fake reports that he was involved in an accident, claiming those who engineered the reports were wishing him death.

Rachier revealed that he had received overwhelming support for publicly claiming he is into the secret sect in an interview with NTV.

He added that many were now interested into joining the sect after his decision to reveal he is in freemasonry.

In an interview with NTV, Mr Rachier said he was introduced to Freemasonry in 1994 by his close friends, adding that the secret society is not based on any particular religion.

The Nairobi-based lawyer said the Masonry includes many people in the country drawn from varied professions.


Gor's Club Executive Committee (EC) said the club should not be drawn into Rachier's individual life of being a freemason since they don't practice it.

Senior Counsel and Rarieda MP Otiende Amollo has since come out to dissociate himself with Mr Rachier’s revelations. Together they run a law firm in Nairobi – Rachier and Amollo Advocates.

The MP chose to clarify that the law firm is not associated with the Freemasonry, and neither is he a member.