Sec gen Ochola: I have no problem with Rachier

Sec gen Ochola: I have no problem with Rachier 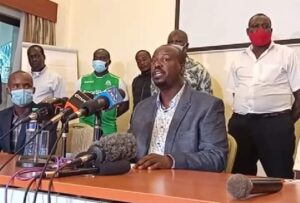 Interview by the Nation


It is slightly over two years since Sam Ochola was elected Gor Mahia Secretary General unopposed. The businessman came into office on August 8, 2020 after Ronald Ngala bowed out of the race.


Nation Sport reporter Cecil Odongo spoke to him on a range of issues from the leadership cirsis in Kenyan football, Fifa ban, and his plans for the most successful club in the country.

Q: The current state of uncertainty in Kenyan football has caused a lot of suffering to the players, coaches and referees. How are you coping with this at Gor Mahia?


A: It’s been so hard for us to run our team’s affairs. We’ve been incurring expenses at a time when there are no games to play yet we must honour our contractual obligations to the players and office staff. Our financial resources dried up, including cash meant for participation in the league, gate collection and even sponsors who have stayed away due inactivity on the football pitch.

Q: Did former CS Amina Mohamed get it right in disbanding FKF?

A: I can’t tell whether it was good or bad. Government is also a stakeholder in football and is duty-bound to ensure the sport grows. CS Amina’s move shouldn’t have put the game through this long frustrating period. It shouldn’t have taken this long to resolve the matter for the sake of the game. Decisions have to be precise and timely to avoid all these consequences that our football currently faces.

Fifa suspension, uncertainty in the league, player frustration and all the negative effects in football should have been addressed by now to ensure continuity of the game.

Q: With the uncertainty and Kenya’s suspension by Fifa, do you fear that Gor will lose the sponsorship it signed with SportPesa?


A: I thank SportPesa immensely for coming to our aid when we needed support badly! SportPesa is a business partner and in any business, uncertainty breeds fear of loss making. As much as this is the reality, we hope that our sponsor will remain with us as stakeholders find a solution to our football woes. I’m optimistic that our sponsors will soon benefit from our deal.

Q: What did it take to convince SportPesa to agree to a new sponsorship deal of Sh240 million for three years with Gor?

A: Gor Mahia is the biggest club in East and Central Africa and it’s beneficial to align with us. The Executive Committee decided to engage them after our previous sponsor BetAfrique pulled out. Having worked with SportPesa before, it was easy for us to agree in principle.

Q: What does the contract entail? What impact will it have on the team?

A: It’s a three-year contract. They’ll be paying our players, among other things. The sponsorship has been a shot in the arm for Gor Mahia because we were in the financial red by the time they came. This was made worse by the Fifa ban on Kenya. For now, we are able to train and pay our players with considerable ease, making our pre-season preparations even better.

Q: Gor has struggled to pay players’ salaries and allowances. Presently where are you as a team regarding this?

A: We have been unable to run normally due to financial challenges at the club. This is not unique to Gor Mahia. Teams in the Kenyan Premier League (KPL) are equally struggling with wage bills that amount to millions of shillings. We were forced to reduce salaries as a contingency measure so that players would at least get some money for use during the period we didn’t have a sponsor. The executive committee is seeking ways of settling pending salary arrears that accrued before our sponsor arrived. At the moment we are fine, thanks to our sponsor. We hope settle such debts by January.

A: He was sent on leave like any other club employee. The question of firing him doesn’t arise at this point. We expect him back at the club by November 9 as stated in the letter that was signed for his leave. The Executive Committee will decide whether to allow him to resume his role or assign him other senior roles at the club. As you know, he has been part of Gor’s success for close to 30 years as our team manager. The executive will consider that.

Q: Do you get along well with Gor Mahia chairman Ambrose Rachier?

A: For your information, we’ve never been adversaries. In fact, even before my election as secretary, we were best of friends. There was an attempt by some former officials to come back to leadership through co-option, which I felt wasn’t going to help us foster a head as a club because some of them are synonymous with bad things that have happened at Gor previously. Ours was a difference in opinion but we have since agreed to forge ahead. Now, we are united and focused as the executive that’s why you no longer hear ‘noises’ from us officials.

Q: Together with other official of the club, you have been accused of pushing for his resignation as the club’s chairman. Is this true?

A: Chairman Rachier has been at the helm of our club since 2008 and is considered the most successful chairman the club has had since its inception and that alone, accords him tremendous respect from us and the fans. We work together, hold regular meetings and those allegations are just that.

Q: What are your views on his decision to go public as a Freemason?

A: Rachier has every right to expression and association as enshrined in the constitution. Besides, he is a professional and an adult of high standing who makes his decisions independently. I consider it a personal voyage which he’s taking as Rachier and it doesn’t really matter to me. I wish him well.

Q: What have you achieved as Gor’s Secretary General?

My achievements in Gor didn’t just start in the last two years. I ran for this same seat in 2016 unsuccessfully but I didn’t go away from the club. In 2017 I took up the youth team as the principal sponsor for three years until it was promoted to FKF Division 1 League where it is now. I kitted the team, and paid allowances and other expenses.

A: We have streamlined our ticketing to ensure we sell genuine tickets on match days and account for everything. We have a lean and focused office and an open model of funds utilization, unlike in the past.

Q: Why didn’t you go ahead and audit the club’s accounts as promised?

A: The matter somehow got to the Sports Disputes Tribunal (SDT) alongside other leadership issues touching on the former and current office. I'm not willing to discuss matters before the court.

Q: Should FKF elections be held, will you offer your candidature?

A: We want football back like yesterday! I want to see our football grow, talents nurtured, trophies in our cabinet and opportunities created for our young men and women to compete in Africa and beyond. Helping Kenya achieve this is not a small task, it’s a patriotic call that I can’t turn down.