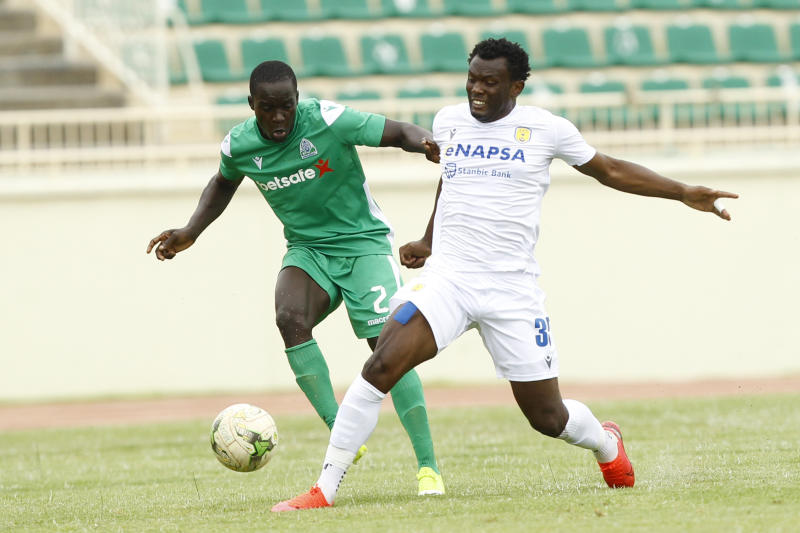 Former Gor Mahia defender David Owino "Calabar" who recently played for NAPSA Stars against Gor Mahia tells goal.com that this Gor Mahia squad is weaker than past ones.


The Harambee Stars defender now says he is concerned with the dwindling standards of reigning champions K’Ogalo
Kenya international David Owino revealed the quality of players at Gor Mahia has reduced over the years, after they lost their first leg play-off of the Caf Confederation Cup against Napsa Stars on Sunday.

The Kenyan champions came up against the Zambian pensioners at Nyayo Stadium seeking a convincing win to take to the return leg but it was not the case as Daniel Adoko punished them with a thunderbolt in the 86th minute for the 1-0 advantage.

Owino, who was playing against his former club which he helped to win three league titles, has now admitted the Kenyan giants are a shadow of their old self and something urgent needs to be done to steady the sinking ship.


Owino also believes it is time for managers to invest heavily in clubs so they can perform well in continental football stating: “There is no big difference between the two countries as far as football is concerned but Zambian clubs take football as a full-time job unlike here.”

Owino who played for the entire 90 minutes as however, refused to rule out Gor Mahia from overturning the first leg result when the two sides face off in the return leg after a fortnight.

“It was a tough game and I must laud my teammates for sticking to the game plan throughout,” Owino continued. “Our plan was to remain compact and take a chance and luckily it worked for us. The return game will not be easy; it will depend on how each team will prepare for the match.”

On his part, Gor Mahia striker Nicholas Kipkirui remained optimistic of getting a positive result in Lusaka by explaining to the same publication: “We should not be written off yet, we have a chance to beat them convincingly in Lusaka and advance to the group stage.”

K’Ogalo coach Manuel Vaz Pinto and his men must now beat the pensioners with more than two unanswered goals on February 21 for them to progress to the lucrative group stage of the lower-tier competition.


“Honestly things have really changed, and that’s football. Back in my days at Gor we had the quality to push any team in Africa, which is not the case now. However most of the players in the current squad are young and still learning, so with time maybe they will blossom,” said the ever industrious defender on the pitch.

Ahead of their return match on Sunday, Owino who joined Napsa from Zesco United is confident his side is one foot into the group stages.

“Our plan was to close the game as much as possible, and try to strike even with half a chance. The idea was to get at least a point away from home, but luckily we bagged maximum points. At home it will definitely be different and for sure we have a better chance,” added the experienced defender.

Owino, Christened Calabar for his exploits against African powerhouses Nigeria in a FIFA World Cup qualifier in June 2013 as Harambee Stars forced a 1-1 draw thanks to a Francis Kahata wonder strike, says Kenyan league is steps behind Zambia’s.

“The standards are not much different but one major variance is that in Zambia football is seriously taken as a job, so players are treated in a more professional way. You will not hear leadership wrangles every now and then like it happens here, which really affects the players,” he noted, reflecting on his seven-year football journey in Zambia.

To his K’Ogalo fans who recall his dedicated performance at the club between 2012 and 2014, Owino had a simple message after forming the solid wall against Manuel Vaz Pinto’s men.

“Gor remains special to me to date, but I have to work, you know. When it comes to work we put everything aside and deliver professionally, we must put bread on table,” a laughing Owino said.