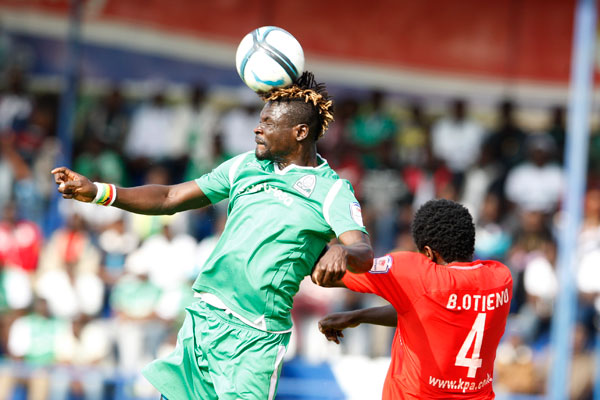 Francis Afriyie has revealed he left Kenyan Premier League (KPL) giants Gor Mahia due to harassment from the landlord.

Afriyie joined Gor Mahia before the start of the 2019/20 season and went on to score six goals in 11 matches. The Ghanaian, now at Township Rollers of Botswana, joined Gor Mahia when the club was operating in a tough financial environment.

“The landlord kept provoking me as he used to come and lock my door. At one point he locked the door and said he would not let me in even to access my things inside.

“I would have stayed with Gor Mahia even for the issues to do with the money but the harassment from the landlord was provoking.

“I terminated my contract mutually with Ambrose Rachier [the Gor Mahia chiarman].

The Green Army signed the forward, 24, from Murcielagos FC and he has revealed why he left Mexico for an African league.

“Let me tell you something, in life, everybody has got his own love to do something. I left Mexico because my contract had finished and did not want to extend it,” he added.

“I also wanted to leave Mexico and come to Africa and play and my aim was to get a football club in Ghana.

Afriyie also says he does not regret making the decision of joining Gor Mahia and gave reasons why he preferred the record KPL champions.

“Mexican clubs were chasing me but Gor Mahia acted very fast. They spotted my agent somewhere and started negotiations fast,” he concluded.

“My agent was categorical that if only I would go to Kenya and play that was very fine.

“Choosing Gor Mahia over Mexican clubs is a decision that I will never regret. You know Gor Mahia are one of the biggest teams in Africa.”

Afriyie was signed at the same time as Gnamien Yikpe of Ivory Coast. Ghanaian striker Francis Afiriyie who recently left Kogalo for Township Rollers of Botswana, recently told goal.com what eventually made him take the decision to change clubs.

“I thought things will change at the club, unfortunately, there was no sign they will,” Afriyie told Goal on Saturday.

“[Gor Mahia] is a great club, I enjoyed in the few months we were together it is unfortunate I had to leave. The club has what it takes to be the biggest in Africa only if they find a solution to their financial problems. We had to part ways in mutual consent.

“The fans are amazing and we had a good relationship with them, they are very loyal and love their team.”

“[Gor Mahia] are a good team and everybody wants to be associated with them so if I get a chance of playing for them in the future I will take it. For now, I wish them all the best in the league and future assignments,” Afriyie concluded. The financial crunch at Gor Mahia is taking toll on players with Ghanaian striker Francis Afriyie the latest to ditch the club.

Afriyie left for his native country Ghana before Christmas but has not returned.

Gor however got news of his exit at the weekend via his agent, who attributed his departure to lack of payment of his client’s salary, which he argues is a breach of the contract.

The Ghanaian joined the Kenyan champions at the beginning of the season and has been an important cog in K’Ogalo’s formation.

Club deputy secretary general Ronald Ngala confirmed the developments. “His( Afriyie)  agent said we have not been able to pay the striker as per the contract. This has been due to lack of finances since we currently don’t have a sponsor.”

Afriyie’s exit comes just a fortnight after another striker, Ivorian import Gnamien Yikpe ditched the club for  Yanga SC of Tanzania, featuring as a substitute on January 4 in the derby against Simba which ended two-all.

Despite rumours to the contrary, Ghanaian striker Francis Afiriyie has said that he is staying with Gor Mahia
Additional reporting from goal.com
The Ghanaian striker has confirmed he is still part of the K’Ogalo squad and has opted to finish the season with the club despite financial problems

Gor Mahia striker Francis Afriyie has stated he is keen on helping the team get a transfer fee when he eventually leaves.

The Ghanaian is yet to report back after leaving for his native country for the festive season and many believe he is pondering a K’Ogalo exit. However, the forward has explained his intentions and confirmed he will be back in the Kenyan Premier League (KPL) soon.

“I must admit many “Spanish side Zaragoza, Saltillo and Matamoros from Mexico have shown interest in my services, but I am not leaving yet. I am taking my time and [will] let Gor Mahia get transfer money.

“I want to help Gor to get big transfer money from me, that is why I am rejecting all these offers.”

The striker states it is up to the management to decide whether they will keep him beyond this season or not.

“My contract with Gor expires in July this year; if the team can suit my demands then we will be good to go. Currently, I am working on my flight and will join my colleagues this week. I am still focused on helping the team win their 19th league title,” Afriyie concluded.

On Monday, Gor Mahia lost Ivorian striker Gnamien Yikpe to Yanga SC who snapped him up on a two-year deal.

Polack: We will not miss Yikpe

“I don’t think the club will miss his services,” Polack told Goal. “He managed to score a couple of goals for us while he was around but if he got a good deal, then you have no option but to wish him well.

“[Yikpe] is a good striker but equally we have quality players who can play very well in his role, so that is the reason why I am not worried at all, we will cope well and we will play well.

“Also it is good to let players move because he got a good deal out there, so I don’t think we should have asked him to stay. No.”

If Gor Mahia beat Aigle Noir of Burundi next weekend, they will have the services of the foreign duo of Francis Afiriyie and Yikpe Ghislain. The Ghanaian and Ivorian duo are not available for the opening round but will be eligible should Gor Mahia proceed to round one.

“According to the latest communication we have received from CAF, the two strikers may be allowed to play after the Sunday match ahead of us. This will be a big boost to us,’’ explained Ngala to Citizen Sports.

The winner between Gor Mahia and Aigle Noir will likely face USM Alger in the first round. The Algerian side won the opening leg 2-1 away to Nigerien side AS Sonindep.

“We are ready for the Burundians and our plans started yesterday with our first trophy of the season,  we are building on the players dedication and determination to go places this season,’’ Ngala continued.

In a bid to strengthen their attack for the 2019-2020 Africa Champions League, Kogalo have signed Ghanaian attacker Francis Afriyie.

The 24 year old recently played for Murcielagos  in the Mexican top tier. He made 9 appearances and scored two goals. He previously was in the squad for Vojvodina in the Serbian league though he did not play. Prior to that he played for Bechem in the Ghanaian league.

He is the second Ghanaian to play for Kogalo after Taofiq Zakari who joined Gor Mahia in 2015 but only appeared in friendlies.