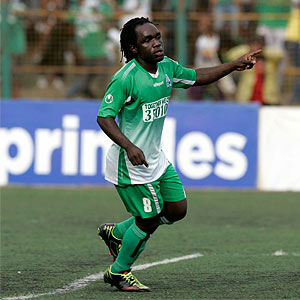 The word “Club Legend” should never be used lightly. Too often it is thrown around carelessly even to players who are excellent but have not reached the calibre required to be considered a club legend.

What really makes a legend?

One definition of a legend is a player who plays a pivotal role to enable the club to win trophies. Not just playing a key role but a pivotal role. Peter Dawo meets this criteria for playing the pivotal role when Kogalo won the Africa cup in 1987.

A second definition is all round brilliance when the team is winning trophies. Such is the case with Magongo who shone most brilliantly when Gor Mahia won the league 4 times in the mid 1980s and went on to win the Africa cup.

In some cases a player is recognized as the best at his position not just in the country but at a regional level. Such was the case with Bobby Ogolla whose fame shone throughout East and Central Africa. And today is considered the greatest central defender Kenya has ever produced.

Another definition of a legend is one who plays a pivotal role in enabling the club achieve unprecedented feats. As such players like Thigo, Owino Kempes and Oluoch “Lule” meet this criteria for enabling the club reach the Africa cup final in 1979, something that no Kenyan team had achieved until then.

An aspect of being a legend is the ability to win games over the club’s sworn rivals such is the case with Sammy Onyango Jogoo who almost always scored against bitter rivals  AFC Leopards.

Look closely at Dan Sserunkuma and you will find that he meets all these criteria:

In 2013 Gor Mahia had gone through a period of 18 years without a league title. By the halfway point of the league, Gor Mahia was leading but their lead was tenuous. The club went into a mini-slump just as arch rivals AFC Leopards were gaining momentum with their AFC players declaring that they were in the “overtaking lane”.

Gor Mahia fans feared another late collapse would deny them a much need league win, especially after the scoreless draw with City stars on August 4. It was then that Sserunkuma went on a scoring tear. Firstly he scored the opening goal as Gor Mahia came from behind to tie arch rivals AFC 2-2 in a pivotal top of the table clash that allowed Kogalo to maintain their slim lead over AFC. The second goal by Owino Calabar was even more memorable as it left AFC players holding their heads in despair as the proverbial overtaking lane was suddenly clogged with traffic and unpassable.

A loss to Tusker shook the club and with coach Matano gloating about possibly ruining Gor Mahia’s title aspiration again. Fans were jolted. But then Gor Mahia went on to win the next 5 games against Chemelil, Mathare, Thika and Sofapaka with Sserunkuma scoring in all the games. The game against Sofapaka was most memorable. Sserunkuma latched onto a back heel from Patrick Oboya to rifle the ball into the roof of the net. It all but clinched the title after an 18 year drought and sent players and fans alike into celebratory raptures.

Come 2014, Sserunkuma was now back at helm as leading striker. And despite a player turnover Sserunkuma adjusted to various striking partners and midfielders and ended up as the league’s leading scorer with 16 goals, further ahead than his closet rival. The total of 16 goals was 40% of the total goals Gor Mahia scored during the season.

The 2014 league title was a collective effort. Everyone from the goalkeepers, defenders, midfielders and strikers played key role. But the total of 16 goals credited to Sserunkuma was 40% of the total. It crystallizes why one can conclude that Muzeyi “Flava” played a pivotal role in retaining the title. In the process, Gor Mahia won the league title for an unprecedented 14th time.

Consistency and all round brilliance

Of all the players who have ever played against Gor Mahia, none has scored against the arch rivals AFC. He quite literally scored every time he played against AFC. Most memorable was his goal in 2012 at Kasarani in which he picked up the ball outside the 18 yard box, then he lost an AFC defender with his trademark rapid acceleration before unleashing a rocket that hit the roof of the net leaving the AFC keeper rooted to the ground.

Loyalty to the club

In mid 2014, amid a mass exodus from the club, rumours swirled that arch rivals AFC were preparing to lure Sserunkuma to their camp. But “Flava” answered simply that joining the arch rivals is an act of disloyalty that he would not consider. Now this is a man who understands loyalty.

He played for the club for a solid three seasons. In today’s football, it is rare for a player if his calibre to stay at a club for three years while players of lesser talent leave at every turn.

Departing Uganda Cranes striker Dan “Flava” Sserunkuma has praised Gor Mahia fans as the best he has ever seen.

“Gor Mahia fans are very adoing and I will miss them,” “I enjoyed being around Gor Mahia fans. They are the best I have ever come across in my entire footballing career. The fans made it easy for us to deliver results because they support team from start of a match to the end,” said Sserunkuma to goal.com

I must admit that at some point they made us play for a win because we kept asking ourselves…look fans have come in droves to support us on…so why can’t we deliver win for them? They also came in droves during our final two matches away in Kisumu.

“Kisumu if far from Nairobi but the kind of support we received against Muhoroni Youth and our final match against Ushuru FC was amazing. They (fans) are the best thing that happened to me at Gor Mahia.”

Sserunkuma concluded that he dcided to leave in order to pursue new challenges.

“It was a matter of getting a new challenge and taking my game to the next level. I will always have Gor Mahia in my heart and want to wish them a good campaign in African Champions League competition next season.

“I also pray that they win Kenyan Premier League title for a third successive season. They can make it because they have a good squad and a very fantastic coach (Frank Nuttall).” concluded Sserunkuma to goal Tanzania.

5 thoughts on “Dan Sserunkuma leaves Gor Mahia as a legend”