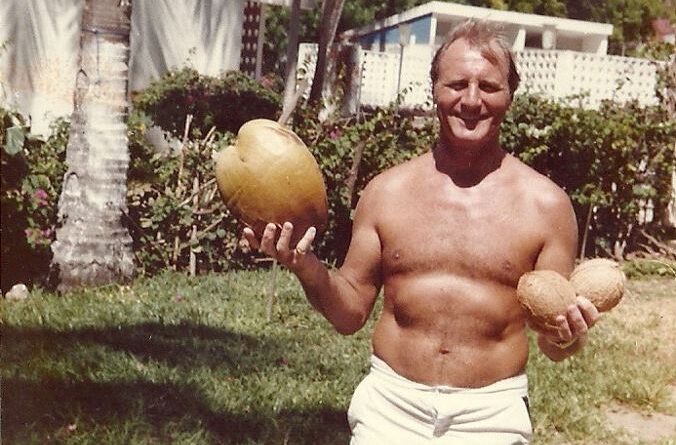 Len Julians is fondly remembered by Gor Mahia fans as perhaps the greatest coach ever to coach Gor Mahia football club. He coached the club to 3 successive league titles from 1983 to 1985 and again in 1991. He is also credited with grooming what is perhaps the greatest generation of players ever to play for any club in Kenya. Players like Charles Otieno whom Julians nicknamed “the engine”, Abbas Magongo, John Okello “Zangi” , Abdallah Shebe, Hesborn Omollo, Sammy Onyango and many others all came of age and became legends under coach Julians.

Leonard Bruce Julians was born in Tottenham London on 19th June 1933. His first club was Leyton Orient whom he joined as a centre forward in 1955. After three years at Leyton Orient and a stellar record, Julians was spotted by Arsenal scouts who convinced him to join the gunners in 1958. Upon joining Arsenal, he scored on his debut, in a match against Luton Town. Playing as a centre forward for Arsenal , Julians scored 10 goals in 24 starts between 1958 and 1960. It was a superb scoring record which is why he was remembered fondly by many Arsenal fans of the time. Many of his goals were superb well taken strikes with good technique. Despite playing as a centre forward, Julians was also an excellent passer and set up several goals for his team-mates. As such he also occasionally operated as a winger or an attacking midfielder. He was versatile.  However at the time, Arsenal had a galaxy of strikers and competition was tough. So at the end of the 1960 season, Julians joined another top tier team, Nottingham Foreast. At Nottingham Foreast, Julians stayed for 4 season, making 125 appearances and scoring an incredible 58 goals. An excellent strike rate for someone who played several positions. After leaving Nottingham Foreast, Julians joined Millwall who at the time were playing in the English lower tiers. In his first season there, Julians scored 16 total goals including a memorable hat-trick against Halifax. At Millwall, Julians scored a total of 22 goals in 45 appearances between 1964 and 1966, helping them gain back to back promotions. During his stay at Millwall, the team set a record of playing 59 home games without loosing. Julians played a key role in setting that record including scoring the equalizing goal when the record was set.  He stayed on at Millwall until 1968. He is rememebered as one of the greatest players ever to play for Millwall. Upon leaving Millwall, Julians now in the twilight of his playing career, went to play in the fledgling North American Soccer league where he was player-coach for the Detroit Cougars. Injuries brought his playing career to an end and he barely played for the Cougars. Upon his retirement, the 35 year old Julians was immediately appointed as coach of the Cougars. Julians during his Detroit Cougars days

The year 1983 started on a disastrous note for Gor Mahia. The club looked set to pick up where they left off after the 1982 season which was perhaps the most disastrous in the clubs history until that point. The 1983 season started with the CECAFA club cup that was held in January of 1983. Kogalo made an unceremonious exit when they lost the first two games to rivals AFC Leopards and to Uganda’s SC Villa. After the tournament, a Ugandan official admitted having succesfully bribed some Gor Mahia players. Then came the 1983 cup winners cup in which Gor Mahia inexplicably lost 0-3 at home to Vital O of Burundi after having won the 1st leg away 2-1 in Bujumbura. In the Kenya National Football League, Gor Mahia started with a 1-1 Draw against Nzoia, a 0-1 loss to Motcom of Kakamega and a 1-3 loss to Kenya Breweries. Fans were already furious at the club officials for the unceremonius losses at continental level had finally had enough. They demanded changes. Many wanted chairman Zack Mbori out. Mbori and club patron Joab Omino under pressure, decided to look abroad for a coach. In came Len Julians to take over from Jerry Imbo and his assistant Peter Ouma who seemed overwhelmed by the situation.

Immediately upon Julians arrival, Gor Mahia who had not won a single league game, bounced back on their visit to Mombasa beating Kenatco and Cargo (now known as Bandari) 1-0 and 3-1 respectively. Midway through the 1983 season, Gor Mahia were in second place, only a point behind military side Scarlet. Midway through the season, Gor Mahia beat English premier league side, Norwich city 4-2 in a friendly match. With two games left before the end of the league, Gor Mahia had clinched the league with a memorable 1-0 over rivals AFC Leopards. Commenting after the game, coach Julians said “I feel so good that the young boys have done so well in the short period I have been with them”. They finished the league having scored 80 goals in 38 games.
Gor Mahia under Julians were playing brilliant champaign football. Most importantly, Julians had turned a group of young inexperienced players into superb players. The likes of Charles Otieno, John Okello “Zangi” who joined from Kisumu Police, Hezborn Omollo who joined from Baba Dogo FC and Abdallah Shebe. All had joined Kogalo from obscure lower division teams and Julians had turned them into international calibre players. The youthful Sammy Onyango became one of the most complete players ever to play in Kenya. Indeed the one aspect that Julians is legendary for was his ability to mould talented players into first class performers. Perhaps it was due to the fact that during his playing days, Julians played in a variety of positions which made him perfectly suited to coaching several different positions. Julians also had a fierce temper and was often seen giving players the “hair dryer” treatment from the bench.

Hezbron Omollo who had joined from a Nairobi provincial side known as Baba Dogo., immediately became a premier goal scorer. In his first season in the league, Omollo finished second in the league in scoring with 20 goals. He had developed a knack for popping up in the right place at the right time to finish off moves by team-mates like Zangi, Engine, Jogoo but especially Shebe with whom Omollo had developed a telepathic understanding. Charles Otieno was nicknamed “the engine” by Julians because according to Julians, it was he who literally functioned as a power supply for the team. Zangi was only 18 but had the confidence of a veteran. He had a combination of speed, grace and directness that sent Kogalo fans into raptures. Shebe had brilliant ball control and an innate ability to create chances by drawing the defence and releasing team-mates in scoring position. Gideon Hamisi playing as an attacking midfielder, became lethal in front of goal, scoring 12 league goals that year. Veteran AFC defender , Josephat Murila recently indicated that the most difficult players to mark were Gideon Hamisi and Sammy Onyango because they could score goals from impossible situations.

Come 1984, Gor Mahia lost Charles Otieno to Kenya Breweries but signed George Onyango “Fundi” from Cargo via Lake Warriors. Also joining the team was Malindi based Abbas Khamis Magongo who had defected from Tanzania earlier on. Whereas Magongo was a decent player  in the Tanzanian league, under Julians he became a brilliant midfield operator with the ability to single handedly dominate and control the game. He may well be the best midfielder Kenya has ever produced although some will argue for Thigo. Fundi became a visionary playmaker with a knack for scoring crucial goals. Hezborn Omollo finished as the league leading scorer in 1984 with 23 goals. Gor Mahia scored an incredible 86 goals in 34 matches. That was way ahead of second placed AFC who scored 73 goals. In the last day of the league, they beat Lake Warriors 2-0 to clinch the title. Since its formation, Gor Mahia had never won the league twice in a row. After the match Julians was carried shoulder high by fans as the rest of the players took a lap of honour. In 1985, Gor Mahia had built such depth that even with the suspension of 6 key players, they were able to win the CECAFA cup held in Sudan. New players like Swaleh Ochieng, William Obwaka, Tirus Omondi and George Odembo “Nyangi” were also become classy players thanks to Julians tutelage. Shebe became good enough that in a friendly match against visiting Swiss side Schaffhausen, he was able to earn a trials. He thus became the first Kenyan to play in a top European league. Gor Mahia won the league for the 3rd time in a row with a 5-1 win over Kisumu Hotstars and were winning in style. Julians then left Gor Mahia and headed back for another coaching stint in the United states. By the time he left, he had moulded at least a dozen players who became stalwarts for the national team and helped Gor Mahia to superlative performances in the African cup competitions between 1987 and 1989. When Kenya reachced the All Africa games finals in 1987 and qualified for the 1988 Africa nations cup, nearly half the players were Gor Mahia players and Len Julians products. Players like David Ochieng, Tirus Omondi, Austin Oduor, Charles Otieno, Abbas Magongo, George Onyango “Fundi’, George Nyangi and Sammy Onyango.

Julians was to return again in 1991 much to the elation and excitement of Gor Mahia fans. He led the team to win the national league. Tom Odhiambo and Jared Ochieng Achieng formed a forwardline combination reminiscent of Shebe and Omollo in 1984. Felix Otieno’s inspirational midfield play reminded people of George Onyango fundi while Allan Odhiambo was a mix of Charles Otieno’s industriousness and Isaiah Omondi’s enforcer mentality. This time however, Julians stint at Gor Mahia lasted only one year. He left Gor Mahia at the end of 1991. In truth, the clubs precarious financial position meant they could not afford Julians. It is not known where his coaching career took him after the 1991 season.

Sadly Julians passed away on December 17 1993 in Southend England.  The entire Gor Mahia fraterneity mourned his passing. Condoleneces were sent by then Club Chairman Joseph Ogode, patron Joab Omino and by former players and officials. At the time of his death, Julians owned a car repair garage in Meopham with former team-mate Bryan Snowden with whom he played at Millwall. Meopham is a village that is 40 kilometres southeast of London.