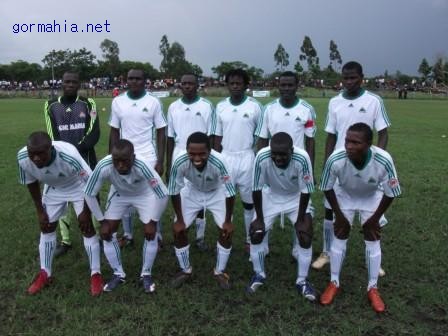 by the vastly experienced APR and also intimidated because they had never played in front of a large crowd.

Rwanda’s APR gave Gor Mahia a harsh reality check on their return to continental football with a 5-0 drubbing at Nyayo National Stadium.

Fuadi Ndayisenga opened and closed APR’s account and Labama Bokota also netted a brace in between with Elias Nzamukunda getting the other.

In a display that left APR coach Rene Fehler confident of a second round passage to the Confederation Cup, Ndayisenga left Steve Otieno for dead to fire low into the left corner of Jerry Onyango’s goal on 15 minutes.

Bokota doubled the lead on 33 minutes with a free header before sweeping the third a minute later into the roof to silence the fanatical K’Ogalo fans who turned up to watch the Confederations Cup tie on Sunday.

“We are in the second round simple and clear,” a confident APR coach, Fehler, said.

Gor Mahia coach James Siang’a was left clutching on hope etched on a youngside he said would grow to challenge such experienced sides as APR.

“APR’s experience told. They played very well and I agree they outplayed us,” Siang’a said.