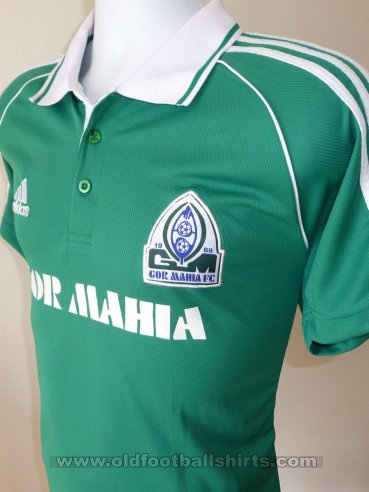 Since 2014, Gor Mahia have been trying to sell their authentic jerseys to no avail. Sales have been abysmal. A few months ago, Chairman Ambrose Rachier said on Citizen TV that the club is making no money from jersey sales. The reason he indicated is that cheaper knock offs are available from enterprising pirates.

In fact as far back as 2012 when Tuzo sponsored Kogalo, Tuzo themselves complained about abysmal jersey sales and cited it as one of the reasons for ending the sponsorship. At the time, Brookside were in charge of jersey sales and the club took only 10 percent of revenue from jersey sales. But even a big company like Brookside dairies could not compete with pirates.

Knock off jerseys are available for a fraction of the price of official replicas. Gor Mahia first tried to sell their official kit at Ksh 5000. When it was not selling, they knocked the price down to Ksh 3500. Still sales are abysmal.

Meanwhile knock-offs are available for Ksh 1000, and sometimes even less. When Gor Mahia went to play in Kericho earlier this year, pirates were selling “Kipkirui” labeled jerseys at the stadium. And they did roaring business because Nicholas Kipkirui is still very popular in Kericho.

The definition of insanity is to repeat the same thing over and over and expect different results. If you can’t beat the pirates then join them. The fact is that broke Kenyans will never buy a Gor Mahia jersey at Ksh 3500. Gor Mahia should just link up with a printing shop and make cheaper jerseys for sale at Ksh 1000.

In fact Gor Mahia also missed on opportunities to cash in on popular players like Francis Kahata whose jersey would have been a big seller in central province.

There are other opportunities. For example, Pirates are selling Gor Mahia scarves and even T-Shirts. And as far back as the early 1990s, there were pirates selling ballpoint pens with “Gor Mahia” printed on them. They were sold at the stadium at three times the cost of a regular ballpoint pen and many fans would buy.

Sell at the stadium and educate fans.

These jerseys should be sold at the stadium when Gor Mahia are playing. Further to that, fans should be educated on the importance of only buying from locations that are sanctioned by the club.

It has been said many times but it is worth repeating. If fans think the money is being miss-appropriated, they will not participate in any initiative that is meant to raise funds for the club. Indeed many fans who used to flood the stadium around 2011 and 2012 have stated that they stopped attending because they think officials are misappropriating gate proceeds.

This article is not a reaction to Sportpesa’s decision to terminate all sponsorship. Whether or not the club has a sponsor, they should stop selling merchandize at five times the price that pirates are selling. It is madness. This is especially true considering that one can buy EPL jerseys for only and jerseys of popular teams like Barcelona for Ksh 1000.