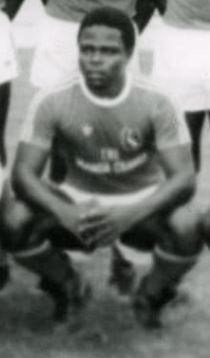 1979 is remembered by Kogalo fans as one of the most memorable years for the club. That was the year the club went on an amazing run and reached the finals of the Africa cup winners cup, thus capturing the imaganiation of the Kenyan public and becoming the first club in the CECAFA region to reach the finals of a continental competition. The team blending youth and experience also went on to win the league in grand style.

In the beginning of that year, neighbors Uganda were in turmoil amid internal wars between Iddi Amin’s forces and Milton Obote’s forces. There was also the war between Uganda and Tanzania which was fought when Amin attempted to excise part of Tanzania.

Ugandan national team players, Tim Ayieko and Abbey Nassur fled the turmoil in Uganda and crossed over to Kenya. Ayieko, quickly made his way into the Kogalo starting lineup where he played as a deep midfielder, playing alongside schoolboy super nova Sammy Owino “Kempes” and the legendary Allan Thigo in the brilliant Gor Mahia midfield.

That Gor Mahia team coached by Jerry Imbo went on to win the league in 1979 and the CECAFA cup in 1980 and 1981. Tim Ayieko is still remembered today by Gor Mahia fans as one of the best players ever to play for the club and is a cult hero to many fans.

Abbey Nassur made his name as a super sub, often coming off the bench to score crucial goals in local and international matches. Against Djoliba of Mali in the 1980 Africa champions cup, it was a penalty conversion by the sure footed Nassur that gave Kogalo a 1-0 win which sadly was not enough to see them through the second round.

Nassur was a dynamo on the right wing often making incisive runs down the right flank and giving tiring defenders nightmares. During the opening match of the CECAFA club cup in 1984 against KCC of Uganda, Gor Mahia were down 0-1 in the waning moments of the game. Coach Len Julians introduced Nassur midway through the second half. It was his menacing run into the KCC penalty box that resulted in a penalty when he was brought down by a desperate KCC defender. The resulting penalty was slotted by new signing, George Onyango “Fundi” thus salvaging a point for Kogalo.

Timothy Bobby Ayieko is born in 1954 to John Njoga (RIP) of Nyakach in Kisumu district and Hellen Anyango also of Kisumu disctrict. At age three, his parents emigrated to Uganda and settled around Kampala’s biggest slum of Kisenyi.

While here, Ayieko joined Nsambya Primary School from where he completed P.7 before joining Pillais SS (now Nakasero SS) where he finished his ‘O’ Levels in 1970.

However, due to lack of funds to further his education, Ayieko quit school to become footballer. He was straightaway drafted into Nakivubo Boys and by then the team acted as the feeder club to Express FC, which he later joined but failed to break into the first team due to his diminutive size and inexperience.

In an effort to get meaningful employment, Ayiekoh left Nakivubo Boys in 1972 and crossed over to Natonal Insurance Corporation (NIC), which at the time was an emerging football powerhouse. At NIC, he linked up with fellow youngsters such as Billy Kizito, Ashe Mukasa, Stanley Mubiru to mention but a few. The same year, he was called up to the national youth team and was a member of the victorious side that won the regional CECAFA Youth title.

It was after this scintillating performance that Ayiekoh attracted lots of attention and Express was quick to re-sign him in 1974. Ayiekoh’s joining Express coincided with the club’s first taste of success when they won the 1974 and 1975 league titles. Indeed Ayiekoh was a dominant figure for Express midfield and often dictated proceedings especially when going forward.

One of Ayiekoh’s biggest admirers was KCC FC coach Bidandi Ssali, who also doubled as Cranes tam manager. He pulled all stops to land Ayiekoh’s signature and when he succeeded at the end of the 1976 season, Timo, as he was known, completed the country’s best midfield of Moses Nsereko and Angelo Dotte.

Ayiekoh also helped KCC to fill the gap created by the inured Phillip Omondi, who was out for two years. Meanwhile Ayiekoh’s siblings weren’t far off in his wake; Enos Agogoh was a in KCC’s City Cubs and later moved to Express while Chris Alembe was a star player for both Cooperative and UCB.

Initially things didn’t go to plan as expected. Playing deep in the midfield reduced Ayiekoh’s goal scoring ratio and he managed only one goal in 28 games he played in the 1977 season.

However, KCC fans would see the best of Ayiekoh in January 1978 during the CECAFA Club Championship held in Kampala; not only did he terrorize opposition defences at will, it was as if Ayiekoh played like a one-man team.

His hat-trick in KCC 3-0 win over defending champion Luo-Union of Kenya put the City lads in their first ever final. This match is best remembered for the drama after the final whistle when the Kenyans were angry that one of their own (a Luo) had destroyed them.

Ayiekoh shockingly started the final against Tanzania’s Simba on the bench and judging from the early exchanges, all indications pointed to Simba winning the title.

That’s until Ayiekoh and Angello Dotte were introduced for Moses Nsereko and Billy Kizito. The tide completely changed and the Simba goalkeeper was hailed for taking the match to the whole 120 minutes. In the penalty shoot-out, Ayiekoh and goalie Jamil Kasirye missed their spot kicks but Moses Sentamu, Omondi and Tom Lwanga found the net to help KCC win what to date remains their only CECAFA title.

Ayiekoh joined The Cranes in 1973 and was in the squad that eliminated Algeria to book a place at the 1974 Africa Cup of Nations. However, his small frame and young age proved the Achilles Heel and he narrowly missed the cut for Nations Cup team.

The disappointment only motivated him to work harder and his game improved leaps and bounds when he was given the famed number 10 Cranes jersey later on in 1974. In that era, number 10 in any team was worn by star players with the ability to pull off unusual skills.

Ayiekoh was part of The Cranes side that played in the CECAFA Cup in 1974, 1975, 1976, 1977 and 1978. His most memorable contribution was scoring the winning goal that eliminated Malawi from the 1976 semis. Uganda went on to beat Zambia in the final before defending the title in 1977 in Somalia.

He was also a member of The Cranes squad at the 1978 Africa Cup of Nations in Ghana, but due to an injury he sustained on the eve of the opening match against Congo Brazzaville, he didn’t feature in any of the five games and to make matters worse, when the coach Peter Okee put him on the substitutes bench in the final against Ghana, it was discovered that his passport had been forgotten in the team hotel and thus missed the opportunity.

Following the 1979 war, Ayiekoh and a few Cranes colleagues like Polly Ouma and Abbey Nassur crossed over to Kenya due to instability in the country.

Ayiekoh and Nasur joined Gor Mahia and quickly rose through the ranks to become team skipper as well as coaching assistant. Gor Mahia went on to win the 1980 CECAFA Cup in Malawi. Interestingly, he was part of the Gor Mahia team that eliminated Nsambya in 1979 from the CAF Cup Winners Cup.

When Ugandan David Otti took over from late Imbo in 1981, Ayiekoh remained number 2 and helped Gor Mahia defend the regional title the following year in Nairobi.

Ayieko played mostly as a midfield linkman and played pivotal roles in the Kogalo squads that won the league in 1979, reached the Africa cup winners cup final in 1979 and won the CECAFA cup in 1980 and 1981. In midfield he played alongside Allan Thigo, Sammy Owino, Jerry Imbo and Maurice Ouma Ole Tunda to form one of the best midfields the club has ever fielded.

In 1982, Ayiekoh quit football and left Gor Mahia to concentrate on a coaching career. He moved to Nairobi-based Benham Holdings, which he guided to the topflight.

In April 1985, Ayiekoh returned to Uganda for holiday but a few days into the country, SC Villa sacked David Otti and immediately asked him to handle the club temporally as the Villa Park searched for a replacement.

However, the team registered mixed results and finished the season without any silverware and the following year the club appointed Polly Ouma, who had also just returned from a self-imposed exile in Kenya. Ayiekoh remained as an assistant.

In 1986, the pair went on to win Villa’s first league and Cup double and in 1987, they did not only retain the league but also won the CECAFA title. It was in the same year thst Ayiekoh got a ‘B’ coaching license from Germany.

In 1988, SC Villa recruited British tactician Geoff Hudson and made both Ouma and Ayiekoh his assistants. Ouma was incensed and immediately quit but Ayiekoh stayed behind to oversee more success, the peak being Villa’s fairytale run to the 1991 Africa Club championship final where they lost to Tunisian side Club Africain.

Ayiekoh went solo after Hudson left the club in 1992. He guided the club to the league title and also reached the final of the inaugural CAF Cup before losing to Nigeria’s Shooting Stars. Though Ayiekoh added the 1994 league title among his many trophy collections, he was forced to resign in 1996 to pave way for Eddie Butindo.

His coaching nous also saw him handle Uganda Cranes. He started out as assistant coach to Ouma from 1989-1995 and that spell saw Uganda win three CECAFA titles. He was later named Cranes head coach in 1995 to replace Polly Ouma who had quit – but he too quit the following year.

He returned to club football in 1997 when he was offered the reins at Kakira Sugar FC and has never looked back since. He twice guided the club to the Super League and has since taken over the role of Kakira Sugar Sports Officer, in which he concentrates on tapping young talent at the company’s recreation ground.

Ayiekoh’s calm demeanor saw him mentor many players like Paul Hasule, William Nkemba and Sula Kato among others The latest being Maji coach Charles Lukura Ayiekoh, who adopted the Ayiekoh name in honour of his childhood idol and mentor.

Abbey Nassur for his part returned to Uganda in the late 90s and found success coaching Kampala City Council FC in 2002 and 2003, the same team he had tormented at the 1984 CECAFA cup. Today he is an assistant coach at Maji FC. Both Ayieko and Nassur were voted amongst the greatest Ugandan players ever by a panel of former internationals.

Ayieko passed away in Jinja on November-19-2017 due to heart problems. He had received treatment in India but his condition continued to worsen over several months.

His daughter, Lilian Ayieko confirmed that the remains of his father are at Jinja Mortuary.

The Council of East and Central Africa Football Association (Cecafa) Secretary General Nicholas Musonye was a close friend of Ayieko, who later coached Villa and Uganda Cranes as well.

“He was a brother and a friend to me since 1979. I join the people of Uganda, FKF, Gor Mahia fraternity and the people of Nyakach in particular in mourning our brother,” said Musonye, adding
“He was one of the most disciplined, strong and exciting midfielders to thrill crowds in East and Central Africa.” said Musonye to the Nation.