That if it rains it pours is not a phrase we have not been already accustomed to when it comes to matters concerning record Kenyan champions Gor Mahia.

In the latest saga at the team, club treasurer Dolfina Odhiambo has highlighted damning revelations of how secretary general Sam Ocholla, vice chairman Francis Wasuna and one co-opted Executive Committee member Gerphas Okuku doctored minutes and claimed to have been sanctioned by the Gor Mahia Executive Members on their way to changing/adding of mandate in the club’s account as they claimed to increase the same to four for any transactions.

To the treasure’s surprise, the three got their way in successfully conducting the ‘illegal transaction’ after the assistance of the top honchos at Bank of Africa, which holds the club’s accounts.

“Few days ago, Secretary General Mr. Sam Ocholla, The Vice Chairman,Mr. Wasuna and one Co-opted EC member Gerphas Okuku, went to Bank of Africa, which holds the Club's account with doctored minutes claiming to have been sanctioned by the GMFC EC Members authorizing change/addition of mandate and which claims to increase the same to four for any transactions. To my surprise and with due respect to BOA, they managed to do the illegal transaction with assistance of an employee of the Bank, the Bank Manager, Nairobi Branch -Reinsurance Plaza,” a part of the press release read. 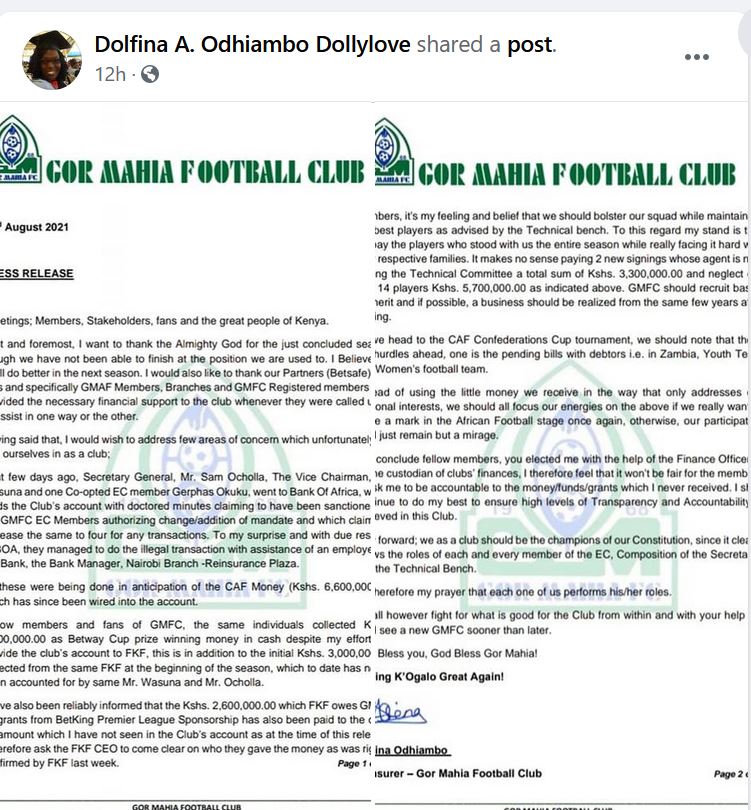 According to the treasure, this latest move by the officials of the club comes as a ploy to reap the KSh. 6,600,000 that the club is set to receive from CAF for their qualification to the CAF Confederation Cup.

The duo of Wasuna and Ocholla are also said to be culpable of the mysterious disappearance of a total sum of Ksh. 7,600,000 which the club treasure says she cannot account for and is not reflecting in the club’s bank portals.

“Fellow members and fans of GMFC, the same individuals collected Kshs. 2,000,000.00 as Betway Cup prize winning money in cash despite my efforts to provide the club's account to FKF, this is in addition to the initial Kshs. 3,000,000.00 collected from the same FKF at the beginning of the season, which to date has never been accounted for by same Mr. Wasuna and Mr. Ocholla.”

“I have also been reliably informed that the Kshs. 2,600,000.00 which FKF owes GMFC as grants from BetKing Premier League Sponsorship has also been paid to the club, an amount which I have not seen in the Club's account as at the time of this release, I therefore ask the FKF CEO to come clear on who they gave the money as was rightly confirmed by FKF last week,” the letter continued.

“As I conclude fellow members, you elected me with the help of the Finance Officer to be the custodian of clubs' finances, I therefore feel that it won't be fair for the members to ask me to be accountable to the money/funds/grants which I never received. I shall continue to do my best to ensure high levels of Transparency and Accountability is achieved in this Club,” the treasurer concluded. 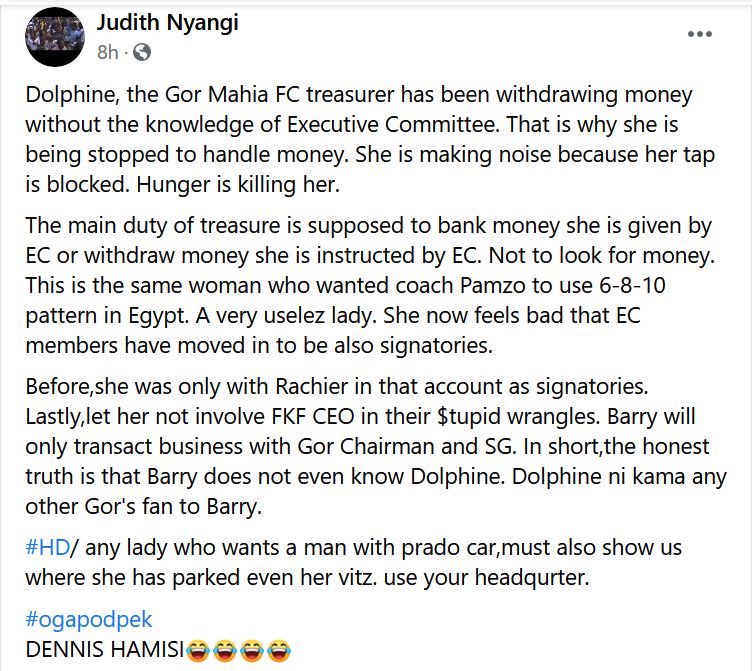 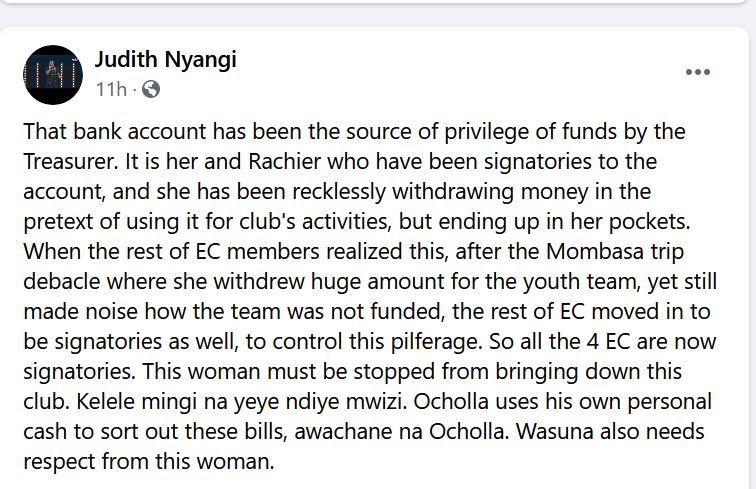 a) Some are known and they can justify their presence as the result of "elections".

b) Others are always recycled so long as Ador remains chairman.

These are the "OWNERS" of Gor Mahia.

GOR MAHIA MAIN BANK ACCOUNT MAY BE EITHER FREQUENTLY OVERDRAWN OR BLOCKED BY KRA.
This may be the real reason why Gor Mahia prefers or rather depends on cash payments and maintains numerous bank accounts because either its main account is usually overdrawn or has been blocked by KRA due to overdue / unremitted taxes. If the account is overdrawn by KES.2m and you pay in 2m the bank will deduct it money and leave you with zero.

During Arocho Live Rachier clarified that he was the one who overruled Treasurer Dolfina's request for the Shield Cup prize money to be paid into the club's bank account as the players wanted their payment ASAP so FKF should pay cash.
Therefore on this treasurer should not exonerate Ador and condemn Ocholla.
There is no problem with the bank mandate being widened. it does not stop the Treasurer's from her core duties importantly financial reporting.
She can still produce financial reports and qualify it that certain officials received the club's income and are yet to account for it.

The problem with Dolfina is she is incapable of producing the club's financial report. For this she totally relies on Gerphas Okuku who is Rachier's appointee.
She openly admits in her statement above: "“As I conclude fellow members, you elected me with the help of the Finance Officer to be the custodian of clubs' finances, "
E.g How much revenue has the merchandise shop raised?
Is it viable?
Top
Post Reply
3 posts • Page 1 of 1