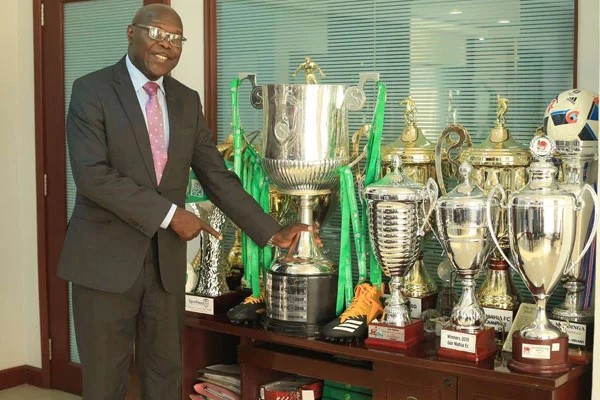 Every now and then, Chairman Ambrose Rachier is questioned on the various shortcomings at Gor Mahia, whether it is the poor performance in continental matches or the dwindling number of members or the shoddy travel arrangements, Rachier’s fall back position is always that the club has won a lot of trophies in his tenure. Indeed Rachier took over the club at a time when it was run by an inept group of people who had basically run the club into the ground. Rachier has turned a moribund franchise into a multiple title winner. Eleven years ago, this column penned an article describing Mr. Rachier as a breath of fresh air when compared to the Chairmen that the club had in the previous 10 years.

So how does Rachier’s performance compare with past Chairmen? The first issue to consider is the different circumstances that the Chairmen of the past worked under when compared to today.

Mr. Rachier has worked during an era when the team often has a sponsor. In fact  prior to the current sponsor Betsafe, Gor Mahia has had previous sponsors like Sportpesa and Tuzo.  In addition, the club has often had kitting deals whose details have never been divulged. And occasionally the league has had a sponsorship deal and a broadcasting deal to further bolster the club’s finances. As a result, Gor Mahia has often had the highest budget in the Kenya Premier League. In fact Secretary General Sam Ocholla recently revealed that Rachier had a transfer budget of Ksh 15 million which he used to recruit 17 new players.

Now contrast this with past eras. Gor Mahia literally won titles on a shoestring budget. There was no sponsor, no kitting deal, no broadcasting deal and league sponsor during the periods when Gor Mahia won 12 titles between 1968 and 1995.

With the available budget, during Rachier’s tenure, this club has easily recruited better local players then the rest of the league. And most crucially, the club has in the recent past recruited high calibre foreign players like Kizito, Walusimbi, Sserunkuma, Aucho, Nizigiyimana, Tuyisenge, Kagere, Glay, Guikan, Ssekisambu, Sibomana, Afiriyie, Yikpe, Ulimwengu, Okello, Konfor, Malisero among others.  Many of these players were key players in their respective national teams. This has been a key factor in putting Gor Mahia at the top. This has been a key factor in giving Gor Mahia an edge over local teams.

By contrast, between 1968 and 1995, Gor Mahia simply did not have the ability to attract top tier players from other countries. Titles were won entirely with local players. The only foregn players who joined Gor Mahia were typically players escaping their home countries for various reasons like Abbey Nassur who fled political persecution and the legendary Abbas Magongo who fled Tanzania and took up Kenyan citizenship.

By contrast, in the past, Gor Mahia had a difficult time competing with teams like Kenya Breweries( now known as Tusker) or other corporate teams like Scarlet (the precursor of Ulinzi), Eldoret KCC, Kisumu Posta etc, all of which offered employment and high salaries to players.

Take the case of Elly Adero. In 1973, the speedy Adero made a big splash while playing for Kisumu Hotstars which had been a feeder club to Gor Mahia. Several teams were pursuing his services. Peter Anyumba, the Gor Mahia chairman pointedly told Adero that being a Luo, he was obligated to play for a Luo team. But Adero told him that Breweries has offered him a lucrative salary of about Ksh 15,000 a month. He asked Anyumba if Gor Mahia could match that salary. Anyumba demurred and Adero joined Breweries for whom he played for over a decade.

In many cases, competing with arch rivals AFC was just as problematic. Around 1985, Peter Owade “Zimbo” of Motcom was the most sought after player. Gor Mahia fans were sure he would play for Kogalo. But at the time Ingwe had a rich benefactor called Alfred Sambu who pried Zimbo out of Gor Mahia’s hands. In 1991, Musa Otieno, put pen to paper, had played for Gor Mahia only to be pried by wealth AFC chairman Cyrus Jirongo.

And unlike in the past, Gor Mahia has been able to pry good players from teams like Tusker FC. Such was the case with Aucho who left Tusker for Gor Mahia and Samuel Onyango who left Ulinzi for Gor Mahia. This was unthinkable in the past. There was simply no way Gor Mahia could pry players from corporate teams. Whereas Breweries successfully recruited several Gor Mahia players, they only player to leave Breweries was Charles Otieno who returned in 1987, only to leave againt shortly thereafter for Bandari. Scarlet had top players like Charles Odero, the 1983 top scorer, Jack Sihul, the 1982 top scorer , Ayoyi “Golden Boy”, Muhanji etc who were glued to their teams by their jobs. Rivatex had a player called Chris Oluoch “Kanindo” whom Gor Mahia pursued to no avail. And in the early 1990s, Gor Mahia tried to pry the lethal Alex Oweya from Kisumu Posta to no avail.

In those days due to lack of finances, Gor Mahia typically relied on signing young players including recent school leavers and grooming them into top tier players.

In the past decade or so, Gor Mahia hardly ever loses key players to local teams. Indeed Lawrence Juma’s departure to Sofapaka and Boniface Omondi’s departure to Wazito both in 2021, marked the first time in about six years that Gor Mahia lost a key player to another local team. When key Gor Mahia players leave, they typically leave for foreign teams. Such was the case with Sserunkuma, Rama Salim, Calabar, Akumu, Kagere, Tuyisenge, Shakava, Joash Onyango, Musa Mohamed and a host of others all of whom went overseas. When they left, they did not strengthen other local teams. They instead went abroad which helped Gor Mahia to continue to maintain an edge over local teams.

By contrast, between 1968 and 1995, it was very common for key Gor Mahia players to leave the club and not only did they defect to other local teams whom they strengthened, but they also took Kogalo secrets with them to other teams. In 1970 for example, following the formation of Kenya Breweries FC, four key players left Gor Mahia for Breweries: Samson Odore, Francis Ooko, Peter Odera and Henry Obiero. Then in 1973, Gor Mahia lost almost their entire starting line-up to Luo Union FC among them national team players like James Sianga, Steve Yongo “Macqueen”, Fred Siranga, William Ouma “Chege”, John Otieno “Hatari”, Sospeter Otin and Owen Nandy.  Despite these disasters Gor Mahia claimed the league in 1974 and then again in 1976 when they won the league unbeaten.

As the 1980s and 1990s unfolded, losing key players became even more common. Charles Otieno “Engine”, the best player in 1983, broke many hearts when he joined Kenya Breweries in 1984 and again left for Bandari in 1988. Around 1990, Kenya Posts and Telecommunications issued a directive that all their employees must play for their teams. Gor Mahia lost several key players who were employed at the parastatal such as Sammy Onyango ” Jogoo” and George Nyangi who both joined Kisumu Posta. In the 1990s, such departures became even more common with players like Sammy Omollo “Pamzo” joining Tusker, Paul Ochieng and Steve Okumu joining AFC, Omondi “Korea” leaving for Kisumu Posta and so forth. Still Gor Mahia was able to win the league in 1990, 91, 93 and 95.

In the last decade or so, Gor Mahia has always had a qualified foreign coach who brings with him tactical astuteness , vast experience, of coaching either in Africa or in Europe. Bobby Williamson was previously Uganda national team coach. Steve Polack had vast experience coaching top Africa teams like Asante Kotoko. Dylan Kerr, Frank Nuttall, Hassan Oktay, Ze Maria, Logarusic were all excellent coaches.

Until their revival  this season AFC Leopards has been moribund for the past 6 or 7  years or so, giving Gor Mahia a huge advantage. Such was not the case in the 1970s, 80s and 90s when they provided intense competition and had some of best players this country has ever produced. Players like Aggrey Lukoye, Jonathan Niva, Mulamba, Masiga, Tasso, Shoto and a host of others. In fact AFC were serious contenders until 2014 when things fell apart.   Tusker FC (formerly Kenya Breweries) now appear disinterested in winning the league. Whereas they went out of their way to recruit the best available players between 1970 and 2010, now they seem content with playing second fiddle. In the 1980s and 1990s Tusker with players like Mutua, Onyiera, Elly Adero, Sholei, Nachok, Pamzo, Nyaberi et al would send shivers down the spine of all teams.  This continued until around 2010 when they were winning the league by recruiting the best local talent.

When  Sofapaka first came into the league in 2008, they were a force to reckon with because they too were keen on recruiting the best. A match against Sofapaka during this period would make any Kogalo fan shake in their shoes. During this period, Sofapaka boasted arguably the best local talent with players like John Baraza,  Wilson Oburu, George Owino , Osborn Monday, Humphrey Mieno, Edger Ochieng, James Situma, Anthony Kimani, Titus Mulama. And their foreign cadre that included Razak Fiston, Musa Mude,  Tafadzwa Dondo,  and Bob Mugalia. Sofapaka for whatever reason, no longer boast such talent. As such, of late they haven’t provided the level of competition that they provided in the past.

Bob Munro, the Mathare United owner has also seemingly lost interest in winning titles. No longer does Mathare assemble the formidable sides of the past that represented Kenya exceedingly well in continental matches. Also Munro has stopped investing in youth development which was a key element in building the great Mathare United teams.

The net result is that Gor Mahia have faced less intense competition from all corners. That seems to be changing now and this season will be a major test for Kogalo.

The one issue that has eluded Gor Mahia during Rachier’s tenure is success in the international arena. In the 1980s, Gor Mahia win the CECAFA club cup three times, in 1980, 1981 and 1985. And this was a time when CECAFA boasted the top teams including teams from Zambia, Zimbabwe, Sudan and Malawi who played regularly and offered stiff competition. In 1985 for example, the tournament was held in Sudan. Gor Mahia without 6 key players beat Sudanese giants Al Hilal and El Merreikh enroute to winning the title.  By contrast Gor Mahia’s performance in CECAFA of late has been below par.

Gor Mahia also had success in continental tourneys reaching the finals of the Africa cup winners cup in 1979, winning the tournament in 1987 and reaching the semi-finals in 1989.

So who is the greatest?

Rachier deserves a lot of credit for taking Gor Mahia from the mediocrity to several league titles. This author’s vote would go to the legendary Zack Mbori. He served as Chairman between 1982 and 1986. During this period, he won the league title three successive times (1983, 1984, 1985). He won the CECAFA cup in 1985. And it was he who built the squad that won the Africa cup winners cup in 1987.

If Mbori had the advantages that Rachier has had in the past 10 years, he would have recruited the best players of the day from Uganda, Rwanda and so forth. Gor Mahia might have recruited top players like the tireless John Latigo of Uganda or even dangerman Issa Ssekatawa. On top of this he might have been able to pry top local players like Paul Onyiera Douglas Mutua and Elly Adero from other local teams. With such a squad Mbori might have taken Gor Mahia to the top of the continent.

On the other hand, Rachier has chance to leave a legacy as the greatest ever if he puts Gor Mahia on the path to self sustainability by becoming more transparent. He will need to change direction as local competition is becoming more intense and local clubs like Wazito are now actively recruiting key Gor Mahia players.

2 thoughts on “How does Rachier compare to past Chairmen?”