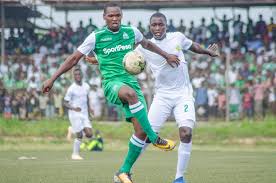 A number of reports indicate that Gor Mahia are set to lose more key players including Nicholas Kipkirui who pledged to stay only a few weeks back, Jackson Owusu, whom coach Polack has been pleading with to stay and Philemon Otieno who was left to fend for himself when he picked up an injury that was potentially career threatening, are all said to be leaving Kogallo.

Latest rumours indicate the trio are set to exit the club in what is expected to be a massive exodus from the record KPL champions
Nicholas Kipkirui, Jackson Owusu and Philemon Otieno are reportedly on their way out of Gor Mahia.

Kipkirui, who was signed from the Kenyan Premier League (KL) side Zoo FC in 2018, is said to be on his way out of the Green Army for personal reasons.

The youngster was among the players Gor Mahia depended on to give them goals in the Caf Champions League and Confederation Cup assignments as well as in the league campaign.

His role became even more important after the record league champions lost Rwandan international Jacques Tuyisenge to Petro Atletico of Angola in 2019.

On the other hand, Otieno missed the 2019/20 campaign after he sustained an injury when he was playing for Kenya against Tanzania in an African Nations Championship (Chan) qualifier in August 2019 at Kasarani.

His injury generated friction between his club and the national team as both sides traded accusations on who was responsible for taking charge of Otieno’s medical bills.

In a recent interview, the full-back stated he had to seek private medication, an effort that was boosted by his international teammates including Victor Wanyama and Michael Olunga.

Owusu, who signed for Gor Mahia in the last transfer window, arrived to join Steven Polack from Asante Kotoko of Ghana but his stay was characterised by hotel controversies.

A Buruburu hotel, where the Ghanaian was staying since he arrived in the country, had halted serving him due to huge pending bills which were supposed to be taken care of by Gor Mahia.

Although he had a good start on the pitch for the KPL bigwigs, his arrival coincided with financial struggles as the club ran without a sponsor.

In the latest interview with Goal, coach Polack confirmed the midfielder had promised him he will rejoin the club ahead of the new campaign but recent reports indicate otherwise.

“Well, he said to me yes, he wants to come back, but you never know, in football you never know negotiations how they go,” Polack said.

“I still want to keep the player, he is part of my plans and I have asked the club to make sure we keep him but as I said, at the end of the day what matters are the negotiations between the club and the player.”

The tactician also said he was going to come back from his leave only if he is assured the situation at Gor Mahia improves.

Gor Mahia have lost Boniface Omondi to Wazito FC whereas David Mapigano left and has signed a two-year deal with Azam FC of Tanzania.

The Green Army have, however, been linked with a number of Western Stima players including Benson Omalla, Samuel Njau, Kelvin Wesonga, Sydney Ochieng, Kennedy Owino, and Abdalla Wankuru.