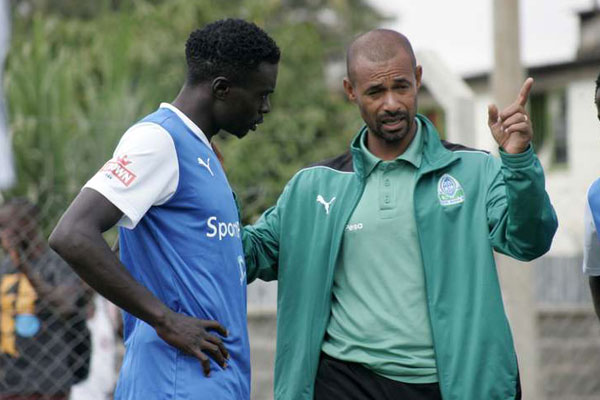 Despite coach Steve Pollack vehemently denying that he was leaving, there are numerous reports that he has indeed been replaced by Ze Maria

Additional reporting from goal.com
The KPL heavyweights are set to confirm the former KF Tirana tactician as the new man in charge as Steven Polack has left the country

Rumours of the Brazilian’s return to the Kenyan Premier League (KPL) has gathered speed over the past few days and now a source close to K’Ogalo has intimated he is set to be appointed as a coach again.

“Unless something big or very special happens, Ze Maria is the new coach,” the source revealed.
Editors’ Picks

“Gor Mahia have been in the market for a few weeks searching for a new coach since they were sure Polack will not be part of them going forward.

“The hierarchy settled on Ze Maria unanimously because of his previous experience and of course his undoubted love for our team.

“I am saying the office settled on him unanimously because the new officials are working with unity since it is a lean office compared to the previous one.”

Ze Maria’s news comes just a day after coach Steven Polack requested for a 10-day holiday before the 2020/21 season begins.

A source close to Gor Mahia told Goal that Polack has left his role after he tabled a few needs he wanted the club to sort out before the new campaign begins.

“We are aware of how the previous coaches took holidays only to confirm their resignation while away from the club. Take it from me brother, he [Polack] is not returning,” the source said in regard to the Polack issue.

“He asked for a one-way ticket and all pending salaries before he left and this is the reason I am telling you he is gone. He had issues which seems are not going to be resolved any time soon.

In a recent interview, the former Inter Milan and Levante right-back-cum-midfielder Ze Maria revealed how coaching Gor Mahia was an exciting role.

“It was the biggest club in Kenya, so every game was like managing Flamengo or Corinthians in Brazil. The stadium was packed,” Ze Maria said then.

“There were difficulties. Sometimes you go to a stadium where the players don’t all fit in the changing room, so you have to change on the bus.

“But the passion is absurd. African players are technically similar to Brazilians, but they lack opportunities to move to bigger leagues.

“Because of the pitches, when you dribble, the ball would bounce a metre up in the air, but the quality with which they controlled and conducted it, not even a Brazilian would do that.”

The Brazilian succeeded Frank Nuttall, who had led K’Ogalo to the 2015 KPL title with an unbeaten record, but resigned in 2017 abruptly before joining KF Tirana.

He exited the club after it had just won the SportPesa Super Cup and were on top of the KPL table with 27 points.

Although Ze Maria could be appointed soon, Polack has maintained he will travel back and resume his duties.

“I am not a coward to leave and not to come back. I have a two-way ticket; after finishing my business with family at home, Gor Mahia will be my next step in preparations for the 2020/21 KPL season,” the Finnish coach told Goal.